The Evolution of Courts, Law, and Legal Systems 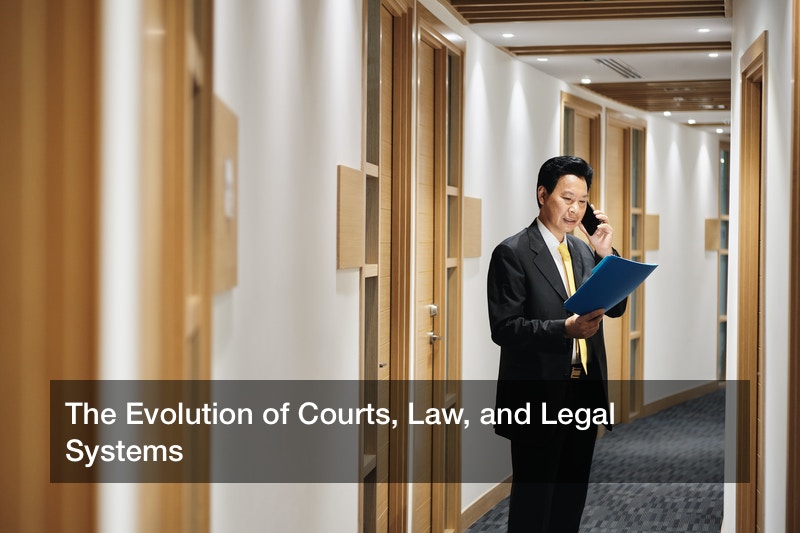 Whenever anything goes wrong and isn’t corrected amicably, such as an injury at work or a neighbor’s fallen tree in your yard, the knee jerk reaction is to get a lawyer. It’s never that hard to find one, as there are over one million lawyers in this country. But how did we get here and why are we so dependent on lawyers? The simple answer is that law and history developed the necessity of legal expert to help citizens interpret the laws and carve out some sort of justice or reparation for injustice.

One of the ways the law has evolved is with the legal understanding and recognition of basic rights. In 1215, a document was presented to an overbearing English monarch. A group of rebel barons wanted an end to unjust imprisonment, limits to the number of payments (taxes) to King John as well as other limitations to his oppressing laws. Called the Magna Carta, this list or charter of English freedoms, set the standard for the English and the U.S. legal systems.

When the law and history intersected, it was clear that to establish freedoms was to also establish laws that protected them. As well as the necessity of enforcing the laws. The U.S. Constitution, ratified in 1791, has a total of 27 amendments, added at different times, that clarify a person’s rights (first amendment speaks of the freedom of religion, speech, and assembly). It also the government’s role in the lives of citizens (sixteenth amendment speaks of the Congress’ ability to tax its citizens). Adding a new Constitutional amendment takes a 2/3 majority of the Congress to vote for the addition.

In this country, there are four basic legal systems or ways citizens can resolve arguments. These are civil, common, statutory, and religious law systems. In some cases, there are groups or combinations of these systems. With the exception of military law, which is a tribunal system, the legal system is designed to protect citizens’ rights as outlined in the Constitution or in each state’s constitution. It hasn’t always been a smooth transition to the courtrooms of today. The question is, can “law” be handled by two disagreeing people between themselves?

For example, in the wild west two parties involved in a dispute and then, *bang* one shoots the other and the matter is officially “settled.” But things spiral out of control with vigilante justice as one relative seeks retribution, the killing continues and murder victims multiply. The dispute is forgotten. It’s decided, that while most citizens can peaceably resolve disputes, it’s best to allow a legal expert to get involved. The system develops an individual, different from a judge, to investigate disputes, uncover the facts without bias, and bring it to a court. This objective party acts as a litigator to help decide the matter.

Statutory law is any law developed and enacted by a governing body. They are strictly construed by courts, with little ambiguity. Meaning that murder in Maine is as illegal as murder in New Mexico. But poaching lobsters is illegal in Maine but New Mexico? Not so much. Messing with lobster traps is serious and an example of state law. Because law and history create a precedent, there is a guide to be considered in subsequent similar cases.

Common law is always being decided—sometimes without precedent. New cases with different aspects are always being decided. Civil law required a litigator or someone who could advocate for an injured party. Over time, personal injury lawyers became a specialized attorney to determine the extent of injury to a person. Did the injury take away their livelihood and ability to support their family? These lawyers will file a lawsuit on their client’s behalf requesting compensation for the many aspects of the injury’s impact. These lawsuits or tort claims, address loss of income (even future wages), medical bills (if any), and intangible things like potential mental health issues (such as depression).

A workplace injury attorney would also work in the same way as a tort litigator, but focus on workplace safety laws. The employee needs an advocate if the employer will not resolve the injury in a timely manner and with adequate compensation. Workplace attorneys must be familiar with the employee’s industry and with Occupational Safety and Health Administration (OSHA) regulations for that particular industry.

In most cases of arrests and convictions, a criminal defense lawyer will be representing the defendant. A prosecuting attorney will bring the case against the defendant or represent an aggrieved party. A courtroom has several important aspects. The judge is in the center. Adjacent to the judge is the witness stand. A court reporter, the individual recording the legal proceedings, sits in front of the judge. Two desks, represent the arguing attorneys, face the judge, and to the left of the judge is the jury. A jury was a group of laypersons decided certain types of crimes. This is a relatively “new” legal concept as it had no basis in English law. But the U.S. Constitution provided for it. Amendments guaranteed the right to a fair jury for all criminal cases (and certain civil cases).

Today, potential jurors are questioned to rule out bias, or personal interest. You’ll see this screening has become critical in the case of large celebrity trials. Many potential jurors may already have opinions on the guilt or innocence of the individual on trial. While any criminal law attorney can question any witnesses or plaintiff, as well as address the jury, it is the judge who pronounces the law and sets the sentences. When a person is arrested, it’s typical for the judge to set bail. Bail is cash or a bond that’s given to the court to ensure that the arrested person will appear in court. If the defendant doesn’t show for his trial date (skipping bail), bail is kept and a warrant is issued for the defendant’s arrest. Yes, you can be arrested twice. Law and history merged to create better and better ways to settle disputes. Bail was developed in England as a means of settling disputes peacefully.

As society has become more complex, so has the law. Different parts of society have also required an increase in lawyers due to updates or increases in laws, regulations, permits, or restrictions. Current estimates on the number of federal laws in America range anywhere between 15,000 to 50,000. Some laws become obsolete as they are replaced with laws that reflect the change of society. One example is the change in laws of traffic from horse drawn carriages to automobiles. Law and history change over time. Laws like Fair Labor Standards are a set of 80-year-old regulations, rather than becoming obsolete, they changed over the years to reflect the kinds of working environments.

Not only has society gotten more complex, so have the laws concerning family and child custody. The law and history are rarely on the side of the child. While you didn’t have an attorney present when you got married, you’re going to need a divorce attorney when you decide to no longer be a couple. The reason these specific types of lawyers get involved is that marriage has become a civil contract. Once signed the couple has an equal share in the division of property. Since children cannot be equitably shared, divorce attorneys can draw up custody agreements. Legal issues such as prenuptial agreements, alimony, and property assignments are discussed and resolved. If you are set to inherit or take over custody of a child, in the case your family members have passed and you are selected to be the guardian, it’s best to seek help from a family lawyer.

It’s not just about wills lawyers can offer guidance and be present for the reading or execution of the will.

In developed countries, such as the U.S., laws have developed surrounding the issue of what happens to property when a person dies. Through legal evolution, law and history skew toward the wealthy. If the individual is poor, they become a ward of the state and any property or money is automatically bequeathed to the state. If the individual gives the power of attorney or legal “guardianship” to their property and money, it is done when their children or heirs have predeceased them. An estate planning lawyer can help anyone with small or large property and assets to appropriately place them in the hands of family or friends. This is done to prevent the state from laying claim to anything a person owns.

Whether you are a renter of a house or apartment, you’re going to need the services of a landlord attorney. Law and history seem to always be on the side of the person with the most money. Still, an attorney can help you make well-informed decisions. You may need legal advice to safely break a lease, request your landlord to fix damages that were not your fault or protect you from any sudden or unexplained increase in rent. An attorney on the renter’s side can help them make well-informed decisions about how to proceed without losing their shirt. For the landlord, attorneys can give advice about how to legally evict a tenant or how to recoup damages or loses if their rental property is destroyed.

As the world becomes more mobile and people move from country to country, immigration is a hot topic in every country. New arrivals to this country have visas that allow them to work and live without being full-fledged citizens. An immigration lawyer may help them become citizens or represent a non-citizen to protect their international rights. Often visas will run out and when they do, the person is in danger of being deported. Immigration law and history are often at odds when it comes to immigrants. A person can become a citizen through the lengthy legal citizenship program or through naturalization. That process occurs faster and often without any effort on the part of the potential citizen. It usually involves an immigration lawyer filing an application for the approval of legal authorities. These specialized attorneys will also help immigrants obtain documentation that will allow them to find jobs and housing.

It’s nearly impossible to get into a courtroom without a lawyer, but there are cases when a person can represent themselves. Although, law and history counsels you against a DIY defense. You need to be 18 years old; it must be an issue that doesn’t require resolution by arbitration (often the case with large companies, banks, other branches of government, and utilities). You’ll also need to know the legal system, the rules and procedures of the court, and the kind of etiquette that is required. For example, you can’t yell, “I object!” if the judge is speaking to the jury.

Did you know about any of these weird laws? Consider the history of the law the next time you’re wrapped up in a legal matter.